Prime Maxima: Warrior has been out for one week! We've done excellent in terms of views and I appreciate folks for giving us great pointers in the Feedback Thread. I sent out copies of the game to families and friends after the launch to which the overwhelming reaction has been to offer the game on different platforms. This was an oversight on my part as this is year 2019 and people want to game in the way they prefer. Perfectly understandable! Luckily, RPG Maker has support for multiple platforms and so you'll now find Mac and Linux builds of the game available in the downloads section! Currently, I don't have a testbed for either platform so bug fixes on these versions will be extremely dependent on player feedback. If you run into bugs on any of the available builds, let us know in the Bug Report Thread.

These new builds rolled out with the first patch of our game, moving us along to v.0.5.1! Here are some changes:

The Mask Tyrant was supposed to be in the game for our launch. However, one of the levels (Abbey Ruins) took a lot of time to perfect and we decided to hold the content until our late May build. This unfortunately meant that any cutscenes, battles and dialogue that featured the Mask Tyrant had to be edited as well. Thankfully, that has changed with the inclusion of some new art assets. 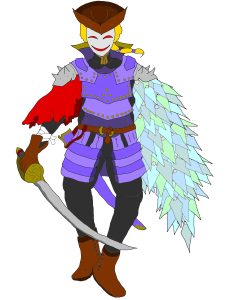 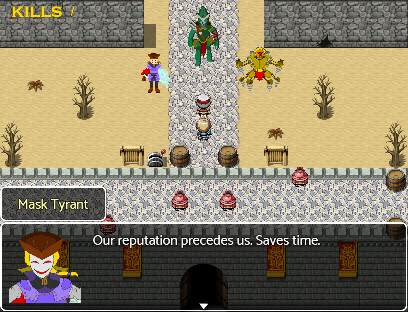 Finally, you can experience his bemused face in all its glory!

The Mask Tyrant won't featured in their level quite yet but Isiah and I have been working on the Lethe Moors battlefield and should be able to give you updates quite soon! Outside of that major inclusion, the other fixes have been a quality-of-life improvements and few things players have pointed out. Looking ahead to the next patch v.0.5.2, it will probably be around April 30th (but don't hold me to that as I am in the process of moving to a new place). Couple things we want to get in by then:

I want to thank everyone that downloaded our game this past week, especially our new followers. I was deeply afraid that I would put this game out there and then just get nothing back, but instead the itch.io community has shown themselves to be a warm and welcoming place. I will continue improving Prime Maxima: Warrior until it is a polished and unique experience for our players.